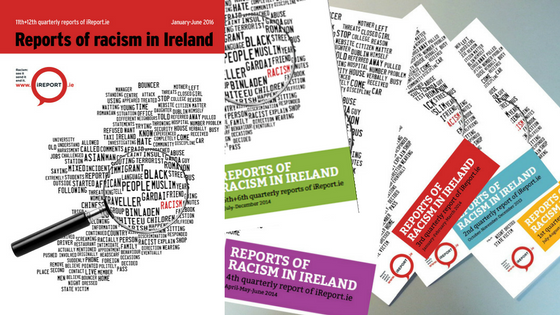 The increased number of reports submitted to iReport.ie in this period, and over the 3 years since iReport.ie was established clearly reflects the frustration felt by both people targeted by racism and those who witness it with the existing official systems for recording racist incidents of violence, abuse and discrimination. In particular across the period there has been an increase in the number of reported assaults, with a greater number of reports indicating that Gardai responses to violence and abuse is inefficient and ineffective. Levels of trust in Gardai to address racism are low, and the high number of reports which indicate that the incidents are part of an ongoing pattern of racism, particularly those which have escalated to violence over a period of time, demonstrate that Garda efforts to tackle racism before it escalates need to improve. Research on hate crimes clearly shows that low-level abuse which is not adequately addressed can increase in quantity and severity very quickly, and this is clearly reflected in the evidence here. The data in this period shows, as in previous periods, that incidents of abuse and violence are often linked to discrimination in access and provision of goods and services, including in housing, education, employment and access to shops, restaurants and public places. Racist behaviour is exhibited, in this data, by professionals, bus drivers, shopkeepers and neighbours, and most worryingly, state officials. Racist violence and abuse is experienced in schools, workplaces, community centres, and homes as well as in streets and on public transport. Reports of racist incidents are ignored, disregarded and compounded by teachers, housing officers, county councils,

elected representatives, as well as by Gardai. The patterns of exclusion evident here, in the extent of institutions which reinforce racist hierarchies and which permit explicit racist behaviours, will produce long-lasting effects on both individuals and communities. This is already evident in the experience of Travellers, and the small number of cases reported in this period by Travellers demonstrates the impact of generations of discrimination and exclusion against an ethnic group. Low levels of trust in police and officials have been produced by decades of racism by officials in decision-making and in the construction of policies which reinforce exclusion, and exclusion by wider Irish society with widespread stereotyping and the disappearance of empathy with members of the community. Low level of empathy for Travellers is indicated by the low proportion of cases which are reported about racism against Travellers by witnesses. Reports about racism for all other groups include a significant level of reporting by witnesses, however this is not true for Travellers. This demonstrates the extent to which anti-Traveller racism is not considered worth reporting today, and indeed may not even be perceived as racism by much of the population. The patterns seen here, affecting a range of non-White and Eastern European communities, are evidence of a vibrant thread of racism running through our institutions and communities. The extent of direct and blatant racism in mainstream media as well as on social media, and the failure of existing legislation to address it, reinforces messages of exclusion and emboldens perpetrators of racist discrimination and violence. Gardai are poorly supported to address racism with the existing legislation, unable to adequately support victims of violence and abuse, and unable to confront racism within the force. Individuals within state institutions who observe racist discrimination by their colleagues, and document the effects on the targeted people, have few options to confront and prevent repeat incidents of discrimination. Ethnic minorities targeted by racist violence are as likely to confront discrimination when they report incidents and to experience further ill effects as a result either through harassment by officials, whether in state agencies or schools, or by exclusion from access to required services.