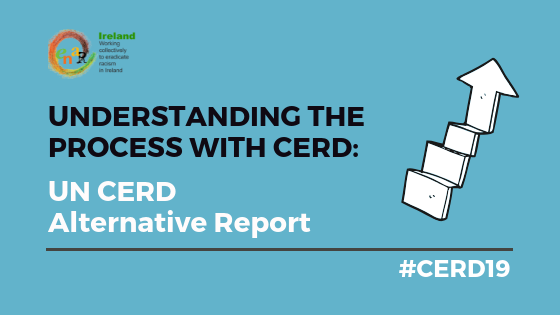 To better understand the process of reporting to the Committee on the Elimination of Racial Discrimination (CERD) this page provides some background information and key documents on the UNCERD, CERD and Ireland’s CERD reporting process.

Ireland ratified the Convention in 2000.

What does the Convention say?

The Convention has 25 Articles. Articles 2 to 7 list States obligations:

The Committee on the Elimination of Racial Discrimination (CERD)

The Committee on the Elimination of Racial Discrimination (CERD) is the UN body of human rights experts tasked with monitoring the implementation of the ICERD Convention. It consists of 18 independent human rights experts, elected for four-year terms. All countries who ratified the convention are required to submit regular reports to the Committee outlining the legislative, judicial, policy and other measures they have taken to give effect to the Convention. Reports are supposedly due every two years but actually expected every 5 years.

The Committee examines each country approximately every 5 years and addresses its concerns and recommendations to the state party in the form of “concluding observations”. The Irish Government is required to implement CERD recommendations within that time, however its reporting to CERD is now overdue, as the last report was submitted in 2011.

Before the publication of the final report, the Government conducted a consultation process where individuals and organisations were asked for submissions in response to the initial Government’s draft 5th to 7th Report (Sometimes also referred to as the 5th to 9th Report). ENAR Ireland issued its submission. In October 2018 the Department of Justice submitted their final 5th to 9th Combined report to the CERD.

The Irish Government is presenting its State Report to the CERD committee in Geneva for examination in November/December 2019.

The Reporting Process for NGOs

At the same time, the Committee wants the following parallel reports from each State Party:

ENAR Ireland is, therefore, coordinating Ireland’s Collective Civil Society Alternative Report through a process of consultation over the summer of 2019.

The International Movement against all Forms of Discrimination and Racism (IMADR) who support NGOs to report to CERD has produced a comprehensive guide for Civil Society Actors.

To get involved and have your say on the state of racism in Ireland you can: